Shaolin Kempo Karate was founded by Great Grandmaster Frederick J. Villari.  In the last four decades, his fighting system has become widely recognized and respected.  His art traces its origin back over a thousand years to the Shaolin Temple of China. Many of the basic methods are still used in his schools today.  The present form has become famous because of its very effective "Four Ways of Fighting."

Changes for Our Times

Some evolutionary changes were necessary due to modern culture and the technological development of many different types of weapons.

People today are bigger, stronger and more knowledgeable about weapons and methods of combat, therefore, movements had to be changed and updated.  Great Grandmaster Villari developed a fighting system that combines the "Four Ways of Fighting" into one.  Today his system has spread nationally and internationally and has a permanent record in the annals of martial arts history. 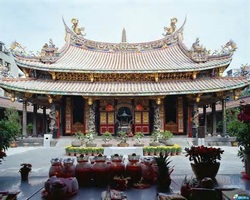 ﻿The Roots of Shaolin Kempo Karate﻿

The great Shaolin Temple in the Song Shan Mountains of central China was established around 495 A.D.  It was built by the Chinese Emperor Hsiao Wen for an Indian monk named Batou, known by the Chinese as Fo Tuo.  Bodhidharma, an Indian monk traveling from India, introduced a new Buddhist meditation method and fighting techniques to the monks in this temple around 530 A.D.  First, he introduced a form of breathing exercises based on animal movements to strengthen and condition their bodies and purify their minds.  Then he taught them how to use the movements of animals for the purpose of self defense.  Over time, the monks changed and perfected these movements.  This style became known and respected as the art of Shaolin Temple Boxing.  Buddhism and Shaolin Temple Boxing or "Shaolin Ch’uan Fa" were the Shaolin Temple’s main legacy to the world.  So it was in China that the philosophical and religious system upon which many martial arts depend were first introduced and nurtured.

In the 1600’s, Japan conquered Okinawa and, to prevent uprising, restricted the people of Okinawa from using any weapons.  The natives had no alternative but to practice the art known as "Te" or empty hand fighting.  Te was derived from the Shaolin "Chuan" which had by that time spread throughout China.  It had become popular around 900 A.D, with the Chinese people of the T’ang Dynasty.  Many Okinawans were secretly sent to China to learn the martial arts.  They later returned and influenced the methods in use on Okinawa.  Okinawans changed the name of their martial art from "Te" to "Karate".  The term "Karate" means "T’ang hand" and is used to acknowledge the Chinese influence in the Okinawan’s art.  Karate was first demonstrated in Japan in 1917 where even more styles developed.

Long before either the Chinese or the Okinawans practiced and developed their arts, the Tibetans and Mongolians had their own form of combat from which the venerable art of Chin Na, or the art of the White Tiger, was further developed.  Chin Na is a devastating form of locking, seizing, holding and grappling.  The Tibetans and the Mongols were masters of the grappling arts.

The art of Shaolin Kempo Karate was founded and developed by Great Grandmaster Villari after many years of studying and mastering numerous different styles of the martial arts including Shaolin Temple Boxing, Jiu Jitsu, Kung Fu, Kempo, different styles of Karate, as well as the secret art of the White Tiger (Chin Na). 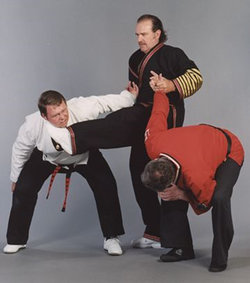 The Original Mixed Martial Art
﻿
Great Grandmaster Villari realized through his varied wealth of experience and his dedication in seeking the ultimate fighting system, that each fighting system offered something unique and each also had its glaring weaknesses that could make a fighter vulnerable.  After studying and mastering many different styles and ways of fighting, Great Grandmaster Villari concluded that there really are only four ways of fighting.


Great Grandmaster Villari understood that the ultimate in self defense lay not in one way or style of fighting.  By combining the "Four Ways of Fighting," he devised and developed ways to integrate diverse methods of fighting into one, eliminating weaknesses and vulnerabilities.  This is the central principle and method behind Villari’s art of Shaolin Kempo Karate.  The Shaolin fighting system is the backbone of the Villari system since Great Grandmaster Villari felt it was the best for promoting overall good health, wisdom and longevity.  This system is well balanced, incorporating mind, body and spirit into one.  In the realm of fighting, Shaolin is renowned for its devastating kicking and punching techniques.  It incorporates the movements of five animals:
The Shaolin style of fighting is based on circular movements, speed, conditioning, and developing strong internal energy, tendons, and ligaments.  These are essential for producing a superior fighter.

Karate is also highly favored by Great Grandmaster Villari and he regards it as simple and quick to learn and execute.  Known for its linear and angular movements with quick shuffles and in-line fighting movements, karate-type blows are more mechanical in execution than Shaolin blows.  They are also more explosive.  Karate concentrates more on external power and fewer moves are required to get the job done.

Great Grandmaster Villari also utilizes the art of Kempo.  It is a mixture of hard and soft movements that blend nicely, though it is not sophisticated enough by itself.  Kempo lacks the grace of Shaolin with its integrated leg maneuvers, the quick shuffles and footwork of Karate and the explosion of hard Karate.

Shaolin movements are more fluent than either Kempo or Karate and have more patterns of multiple strikes.  The weakness here is many wasted movements which create openings for counter-attack.  Karate, on the other hand, has too few movements and is too rigid to stand alone.  Shaolin takes longer to learn than Karate, but once mastered, its blows are delivered more effectively because Shaolin is a balance of the body’s external strength and internal power.  Each martial art offers something to compliment the other.  By combining circular and linear movements, the end result is a system greater than the sum of its parts.

Great Grandmaster Villari also teaches moves of the Immortal Monkey which is known for its art of illusion.  The Monkey cannot be hit.  Its movements are lightning-quick with the ability to change its direction rapidly.  It never exhausts its energy and has superior longevity.  The monkey is always happy! 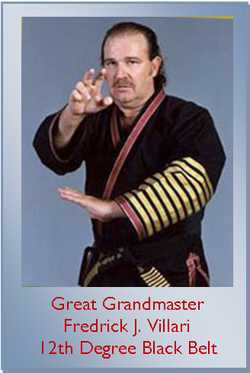 Great Grandmaster Villari is one of the pioneers of martial arts in the Western World.  He revolutionized and enhanced the martial arts, directing it more toward practical fighting.  His contribution to Asian fighting arts helped open the way of the Asian martial arts, on a massive scale, to the ordinary layman.  Before Great Grandmaster Villari, teaching the martial arts to the masses was taboo.  He demystified the prejudice that only a few select people have the ability and should have the opportunity to learn these skills.  He showed Westerners of all ages and cultures "the way of Asian martial arts."

No other master or system can lay claim or take credit for the unique fighting art of the Villari Shaolin Kempo Karate System.  His input and involvement produced a major turning point in the teaching of martial arts.  Great Grandmaster Villari is still actively teaching and demonstrating the martial arts in his schools today
©Copyright DragonStar Enterprises, LLC                           HOME     PROGRAMS     CONTACT     GALLERY      CALENDAR
Proudly powered by Weebly